The 'War of the Rebellion Atlas'

The American Civil War goes by many names. The War Between the States, the War of Northern Aggression, the War to Save the Union, the States’ Rights War, and the War of 1861 to 1865 have all been used to describe the conflict that rent the nation asunder. Following the publication in the 1880s and 1890s of the Official Records of the Union and Confederate Armies, it was given another: the War of the Rebellion.

When the War Department began to issue its 70 volume set of records generated by both the Union and Confederate Armies, it also created an Atlas to Accompany the Official Records of the Union and Confederate Armies, published in 1895. Its 175 plates contain more than 1,000 maps, illustrations, and diagrams detailing battlefield maps, scenes from the conflict, and military equipment.

The Texas Collection at Baylor University is proud to house a pristine copy of the Atlas, and in 2010 the Digitization Projects Group scanned the plates and placed them online in this collection. The maps are searchable by keywords, including military personnel, city, state, and geographic features. 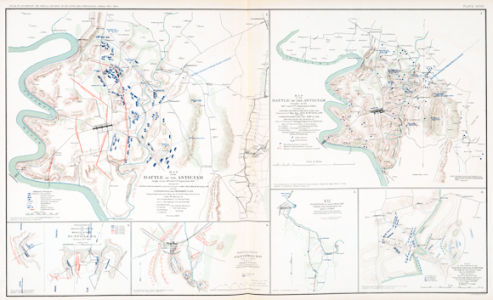 Timeline: Creating the War of the Rebellion Atlas

The Official Records of the American Civil War: A Researcher’s Guide by Alan C. Aimone (1972)

The Official Records of the War of the Rebellion, available online from Cornell University’s “Making of America” project