No one knows for sure when the first Baptists arrived in Texas, but Joseph Bays preached in the area during the early 1820’s, and his family became part of Stephen F. Austin’s Old Three Hundred. After an earlier scouting trip, itinerant preacher Z. N. Morrell moved his family to the Republic in 1836. Other Baptists settled in Texas and began Sunday Schools and started churches while more established Baptist Conventions in other parts of the United States sent missionaries to the frontier. In 1841, the Texas Baptist Education Society and the Texas Baptist Mission Society were formed, and in 1845, the Education Society founded Baylor University which was chartered by the Republic of Texas. During that same time period, churches banded together to organize Baptist associations.

The Baptist General Convention of Texas holds copyright to all issues in all formats of the Baptist General Convention of Texas Annuals, Proceedings, and Minutes as stated in the volumes. The Texas Baptist Historical Collection provided some copies of the Proceedings, Minutes, and Annuals to Baylor University for this cooperative digitization project. 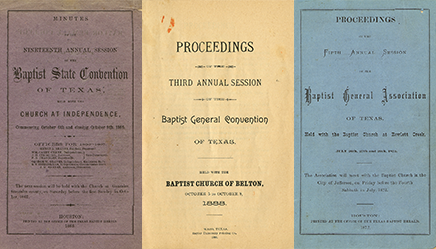 This collection is considered an active collection. Items will be added periodically as they are acquired by Baylor University and processed through the Digitization and Digital Collection Preservation Services group.