The Frances G. Spencer Collection of American Sheet Music is one of the few collections of its kind and size in the country. Acquired by Baylor University in 1965, this collection of approximately 30,000 titles was the life-long pursuit of the avid and well-respected sheet music collector for whom the collection is named. The collection includes many fine examples of first editions such as Jingle Bells and Battle Hymn of the Republic, as well as first editions of prominent American composers of the time such as Stephen Foster and Scott Joplin. Spanning from the late 18th century to the early 20th century, the Spencer collection complements a number of areas of study in addition to music, including Texas and American history, art, political science, sociology, theater, sports, and recreation. It is arranged in over 200 subject categories.

The lyrics and cover art of this collection provide a fascinating window to a wide variety of topics of historical and cultural interest including Texas and American history, art, political science, sociology, theater, sports, and recreation. Access to such an important collection affords researchers and students of all ages an exciting resource for better understanding of our shared history.

This project greatly facilitates the use of the collection by a larger and more varied audience. No longer is it available only to scholars and students within the immediate area; it is accessible throughout the state and beyond by individuals and classrooms connected to the Internet. In addition, the electronic format provides virtually unlimited access while reducing physical damage to the fragile original materials.

History of the Spencer Collection :

The Frances G. Spencer Collection of American Popular Sheet Music contains approximately 30,000 pieces of music published between the late 1700s and mid-1900s. Collected over two decades by its namesake, the collection features pieces by prominent composers such as Irving Berlin, Scott Joplin and Stephen Foster, as well as rarities and first editions of pieces including Jingle Bells and Battle Hymn of the Republic. This collection is being actively digitized and new pieces are added to this digital archive on a monthly basis.

Biographical note and history of the collection

Frances G. (Daniels) Spencer was born in Brantford, Ontario, Canada on February 12, 1889. She received formal training in piano performance at Loretto Convent in Hamilton, Ontario and the Toronto Conservatory of Music, where she graduated. On February 11, 1910 Frances married K. Ray Spencer; shortly thereafter, they moved to Detroit, Michigan, where they lived until 1931.

Mr. Spencer was employed by a series of automobile companies over the course of his career, beginning with the Maxwell Company and Hupmobile before beginning a long stint with Chrysler. His work took the couple (whose 41 year marriage did not produce any children) from Detroit to Kansas City and New York City before they settled in San Antonio in 1945. Correspondence from Mrs. Spencer’s archival papers indicates the move to Texas was related to a lung condition that plagued Frances; doctors believed the climate in San Antonio would be beneficial to her health, and the Chrysler Company obliged by giving Mr. Spencer oversight of a sales division there.

Beginning in the early 1940s, Mrs. Spencer began collecting sheet music in small towns she visited while accompanying her husband on his business travels across the Northeastern United States. She was first drawn to musical comedies and popular music from the late 1800s, but she soon branched out into items featuring lithograph covers she felt were particularly beautiful. Eventually, her interest became a committed hobby, leading her to devote more and more time to pursuing pieces in more out-of-the-way places. K. Ray Spencer described her approach in a letter to Baylor University President Abner V. McCall in 1966:

Frances insisted on collecting pieces that lived up to her exacting standards for physical condition; in most cases, only mint condition items were good enough. On occasions when she found a particularly rare or sought-after piece, she would consent to purchase it even if the condition was less than mint, but she negotiated the price down to match her assessment of its quality. She also contracted with a New York collector named W. Lloyd Keepers to perform restoration work on particularly soiled rag stock-based items (typically produced before 1865) through a process wherein Keepers would bleach pieces using a product called Javel Water, then iron them like a piece of cloth.

As she collected, Frances created her own categories for sorting the pieces into sub-collections. Major headings included Transportation, Musical Comedies, Songs of the Confederacy, Ziegfeld Follies and more. In all, she created dozens of these categories and kept meticulous notes about which pieces she place in each. She kept similar lists of pieces she was looking to collect in small notebooks, dozens of which are preserved in her archival papers. 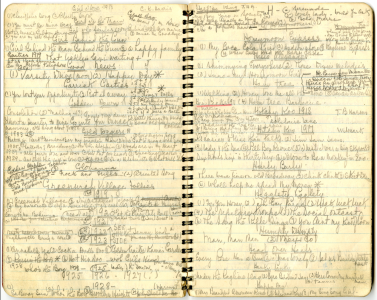 The collection comes to Baylor University

Frances died on June 29, 1961 in San Antonio. Shortly thereafter, K. Ray Spencer put together a pamphlet entitled, 'Authenticated Early American Music Collected by Mrs. K. Ray Spencer,' which he circulated to 'Educational, Musical and Civic' institutions around the country. In the pamphlet, Spencer outlined the number of items available, listed collection highlights, and Frances' subject headings. He estimates the worth of the collection as around $50,000 (later Baylor press releases push that number to $100,000). He notes that 'two top flight bids have already been accepted as this book goes out,' but this may have been added to create additional interest, as no archival evidence indicates who those bidders may have been. 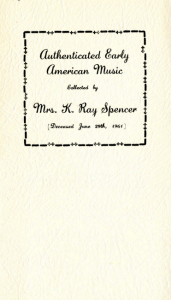 The Baylor connection was made in 1963. A story recounted in a letter from Music Librarian Bessie H. Smith to music collector Dwight S. Juckett summarizes the collection's move to Baylor:

In a letter dated November 2, 1965 from Elwyn A. Wienandt, Chair of Graduate Studies in Music, to Director of Development Tom Z. Parrish, Wienandt adds some additional detail to the early discussions of bringing the collection Baylor. He identifies the minister as Chaplain Walter Blair of Baptist Memorial Hospital, San Antonio. Smith arranged for Blair to meet with Wienandt, who recommended to Dean of Music Daniel Sternberg that such a collection would be a major boon to Baylor. Subsequent meetings with Wienandt and Spencer led eventually to President McCall's visit to Spencer and a contract to gift the collection to the university

One section from Wienandt's letter to Parrish is worth noting here.

If this is true, it would represent a shift in Spencer's mindset between the publication of his Authenticated Early American Music pamphlet and his ultimate gift to Baylor just four years later.

The contract, which was signed by President McCall and K. Ray Spencer, transferred ownership of the collection Baylor University on December 1, 1965. Baylor agreed to keep the collection intact, place it under the supervision of a music librarian, allow access to the collection for scholars and researchers, and give appropriate publicity to the collection. It was also specified that Mr. Spencer would pay for two bronze plaques to be created, one for display outside the building and one in the room where the collection was to be housed.

Once the collection arrived on campus, the arduous process of cataloging the pieces to library standards was begun. Under Smith's direction – and with the help of a half-time employee dedicated to the project – the team began the complex task of processing not only Frances' years of collected sheet music but also combing through and copying her correspondence with other collectors, wholesalers, and music researchers. In April of 1967, President McCall wrote to Smith to ask about the status of the collection. Her letter gave McCall a rundown of the process to date, including cataloging 1,858 items; processing Frances' correspondence; preparing a room to house the collection; designing a process to catalog the items; and answering requests for information.

McCall wrote back a tersely worded note that read, in part, 'According to my calculations the collection is being catalogued at the rate of about eight or nine items per day. I hope this rate can be stepped up as the total cost of accepting such a collection will discourage me from accepting any further such gifts.' The letter had the desired effect, as the rate of cataloguing increased in the following months until Smith and her staff had created records for more than 28,000 pieces of music. 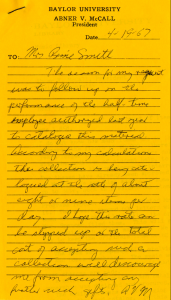 The impact of the collection

The collection drew immediate interest from musicians, historians, and scholars around the country. Mentions of the collection appeared in the Music Library Association's quarterly magazine, the Baylor Line publication, and in the 1972 book The Collected Works of Scott Joplin. In a press release drafted around the time of the release of the Joplin book, Dr. Wienandt said, 'Although the Spencer collection has attracted national attention before, this is the first time it has been used as a basic information source for the rapidly emerging history of black music.' The Spencer collection's selections of music by and about African Americans had placed it in a unique position to aid scholars in an important field of musicology at a very early date.

To date, the Frances G. Spencer Collection of American Popular Sheet Music remains one of the largest in the country. It is a source of great worth to scholars interested in the development of American jazz and ragtime music; the rhetorical devices used by lyricists in the early 20th century; depictions of race in popular culture; and the origins of phrases and cultural touchstones still familiar in the present day.

In 2010, the digital collection was added to the UCLA Sheet Music Consortium, a collaboration between 20 major repositories of sheet music aimed at making their collections available to the public in one central location. Once digitization of the Spencer Collection is complete, it will make Baylor's contribution to the consortium among the largest of any institution.

The historical materials in this collection may contain offensive or inappropriate language or images. The music presented here is part of an historical record that reflects attitudes and perspectives from the past. Some of the images and texts may be offensive to users. Baylor University does not endorse the views expressed in this material, but provides access in an effort to provide a more complete picture of social and cultural issues of the past as reflected in American popular music.

This collections is part of UCLA’s Sheet Music Consortium.

This collection is considered an active collection. Items will be added periodically as they are acquired by Baylor University and processed through the Digitization and Digital Collection Preservation Services group.